Posted on December 29, 2017 by youngstransport

From Landline Magazine
Truckers not paying their share?
December 28, 2017 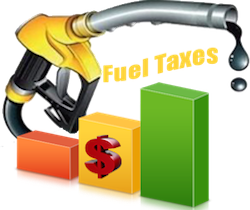 Professional drivers have long heard people not familiar with the trucking industry claim that truckers are not paying enough for the damage they do to roads. The misconception that truck drivers are “getting off easy” when it comes to taxes and fees has once again reared its head, this time in Missouri.

A 23-member task force of Show-Me State officials and private citizens has come up with a list of transportation funding recommendations to submit to the General Assembly by Jan. 1.
Rep. Kevin Corlew, R-Kansas City, chairs the 21st Century Missouri Transportation System Task Force. Among the recommendations prepared by his group is a fuel tax increase. Specifically, the state’s 17-cent-per-gallon tax rate would be increased by 10 cents for gas and 12 cents for diesel.

The tax rate hikes are estimated to raise $430 million annually for roads and bridges.

Rep. Bill Reiboldt, R-Neosho, serves on the task force. He essentially told Missourinet.com that professional drivers understand what they are doing to the state’s infrastructure and they are willing to pay up.

“Obviously they do most of the damage on the roads, to the roads, and they’re good with raising the fuel tax on diesel to perhaps 12 (additional cents),” Reiboldt is quoted in the article.

Truck groups in the state support efforts to raise revenue for transportation work. The Owner-Operator Independent Drivers Association and the Missouri Trucking Association, however, want any tax rate increase to apply evenly for motorists and truck drivers.

In a Dec. 20 letter to the committee chairman, OOIDA expressed support for “reasonable increases in fuel taxes as long as the revenue is used to address the state’s transportation infrastructure needs.”
Mike Matousek, OOIDA director of government affairs, wrote “we also believe adjusting the state gas and diesel tax is the most equitable and efficient way to generate additional funds. However, any potential increase needs to apply equally to both gas and diesel.”

“For example, let’s assume the distance between Kansas City and St. Louis on I-70 is 250 miles:

“It is also important to consider other taxes that tractor-trailers pay that do not apply to personal automobiles, such as International Registration Plan taxes (apportioned at $1,050 annually in Missouri), the Heavy-Vehicle Use Tax ($550 annually), Unified Carrier Registration taxes ($76 annually), and a 12 percent federal excise tax on the purchase of new tractors, trailers, and tires.